The History of The Lady Smith Memorial Institute (LSMI) 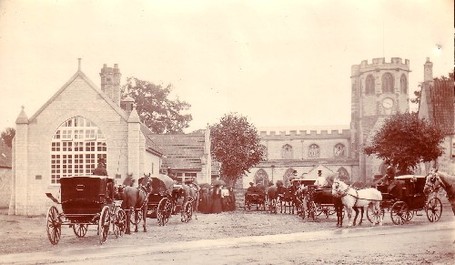 The opening of the Lady Smith Memorial Institute
In 1895 Frances Lady Smith died. She was a member of the Pinney family and had spent much of her life helping the poor in Somerton through various charities. A fund was started to erect a suitable memorial to her. The contributions came from her many friends in London, the church and Parliament, from members of her large family (although she had no children of her own) and from collections made in Somerton. A list was kept of everyone who gave money, but the amounts are not recorded.

It was decided to build an educational institute for the people of Somerton, as the organisers thought this would give poor people the best opportunity to enable them to find better work in the town or elsewhere. The land was donated by Lady Smith’s brother, Colonel Pinney, and by the William Bartlett charity which had knocked down a cottage and cleared land in front of the churchyard some years earlier. Colonel Pinney’s land also contained a cottage which was demolished for the new building. Plans were drawn up, apparently by Mr Norman, a London surveyor, and the scheme was approved by the Charity Commission in 1896.

The building was started in 1901 and there was a grand opening in September 1902. The proposed Reading Room did not materialise and the building was quickly leased by its Trustees to the parish church for £11 a year. In about 1930 the open fires were removed and the stage was created over the old coal yard and earth privies. The original trestle tables were made into the stage and are still in place. Gas heating was installed and the toilets were built beside the front door. All the usual village hall activities took place in the Parish Rooms – plays and pantomimes, jumble sales and bazaars, Parish Council meetings, the Women’s Institute and many smaller social groups.

When the war came in 1939 the Parish Rooms was taken over by the War Department and used as a feeding centre for school dinners, pies for agricultural labourers and other essential workers, air raid wardens, the home guard and so on. The school evacuated from London was brought to the Parish Rooms while the WI found homes for the children. The WI tinned vast amounts of fruit and vegetables, made jam and knitted comforts for the troops. They raised money for the hospital and collected eggs for the patients there.

After the war the church decided not to renew their lease so the Parish Council took responsibility for running the Parish Rooms. The last surviving Trustee in 1953 resigned and the Ministry of Education made the Parish Council the official trustee. The smaller room was let to the County Council and it served as the town’s library until 1995. Meanwhile the Hall continued to be used for many activities as a village hall. Twice – in 1983 and 1991 – the Parish Council investigated handing the Trust over to a committee of the groups who used the building but did not make a decision. When the Library moved to Cox’s Yard, the smaller room was let to the District Council as a community office and it remained there until July 2012. The room was refurbished and became the Pinney Room. It is now used to house a small museum and for meetings of all kinds.

In 2010, following a crisis within the Town Council, the Friends of the Parish Rooms was started to raise money for improvements and to encourage Somerton people to take an interest in the building which is in trust for them. The Friends have been very successful and the Management Committee is also grateful to the Somerton Community Association which has made very generous grants from the Landfill Tax scheme.

Finally in 2015 the Town Council agreed to become the Custodian Trustee and a new Management Committee of volunteers began work. Repairs and improvements have been made and more are planned, so the Parish Rooms is now as good a village hall as any small town could dream of.